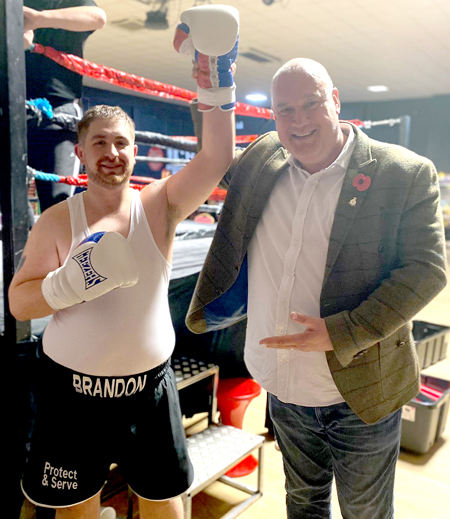 A Birmingham-based home security company has been throwing its’ weight behind a Derbyshire boxer as he fights his way back to the top after a colossal eight stone weight loss.

Protect & Serve Home Security Limited in Boldmere is sponsoring Brandon Ferguson-Eyre who made his first step back in the ring at the weekend and is now in line for a top Super Heavyweight title showdown.

Brandon – the son of MMA fighter Paul Barnett – used to fight at cruiserweight in 2013-14 averaging 13-14 stone in the ring before losing his way and his fitness.

As family life with wife Stacey and their four children took over during lockdown, the pugilist let training slide and suddenly became acutely aware that he had almost doubled his weight.

Shocked at how unfit he felt and now 26 stone, Brandon, from Burton on Trent, made the decision to start back on the fitness trail initially taking up running.

He said: “I realised 12 stone had crept up on me just by being cruel to my body by not exercising and not giving myself healthier food.

“I started running which was tough at first and people warned me with my excessive weight it might put a strain on my heart, but I pressed on gradually shedding pound after pound.”

On Saturday, Eyre stepped into the ring on the Time to Shine bill at Derby’s Roller World Arena, impressing home fans with a first-round win over Dan Edwards.

The boxer – who has shed an impressive eight stone to get himself fit again for the ring – will now face Craig Harper at the 3,000 capacity Leicester Arena in May.

Brandon’s friend and sponsor, Dave Mawson one of the senior managers at Protect and Serve, said the fighter’s performance on Saturday had been “outstanding” adding the best was yet to come.

He said: “At Protect and Serve we are all about defending our homes and Brandon certainly defending his corner before going on all-out attack to ensure he ran out a worthy winner.”

If Brandon can defeat Harper next time out he wins the right to go for a unification fight in July.

← Previous post: "We were left confident & safe in the knowledge our home was protected" Next post: Donations flood in as company rallies behind Ukrainian colleague → 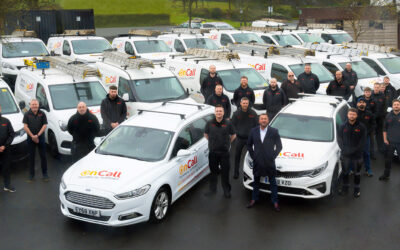 Have you seen the On Call vans and cars on the road across the UK?

Have you seen the On Call vans and cars on the road across the UK? As a group company, they are delighted to own a...

END_OF_DOCUMENT_TOKEN_TO_BE_REPLACED 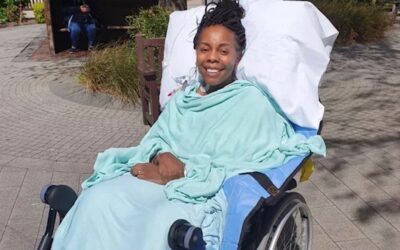 Marathon manager clocks up miles for a good cause

Protect and Serve sales manager Anthony Armstrong has been putting his best foot forward for charity by beginning a...

END_OF_DOCUMENT_TOKEN_TO_BE_REPLACED 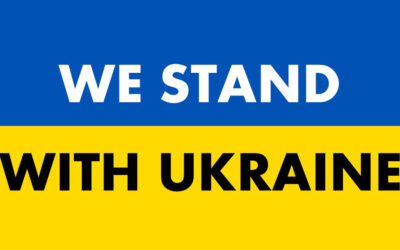 Donations flood in as company rallies behind Ukrainian colleague

Staff at a Midland home security company have been so moved by the plight of the people in war-torn Ukraine that they...

END_OF_DOCUMENT_TOKEN_TO_BE_REPLACED
« Older Entries
We use cookies on our website to give you the most relevant experience by remembering your preferences and repeat visits. By clicking “Accept All”, you consent to the use of ALL the cookies. However, you may visit "Cookie Settings" to provide a controlled consent.
Cookie SettingsAccept All
Manage consent

This website uses cookies to improve your experience while you navigate through the website. Out of these, the cookies that are categorized as necessary are stored on your browser as they are essential for the working of basic functionalities of the website. We also use third-party cookies that help us analyze and understand how you use this website. These cookies will be stored in your browser only with your consent. You also have the option to opt-out of these cookies. But opting out of some of these cookies may affect your browsing experience.
Necessary Always Enabled
Necessary cookies are absolutely essential for the website to function properly. These cookies ensure basic functionalities and security features of the website, anonymously.
Functional
Functional cookies help to perform certain functionalities like sharing the content of the website on social media platforms, collect feedbacks, and other third-party features.
Performance
Performance cookies are used to understand and analyze the key performance indexes of the website which helps in delivering a better user experience for the visitors.
Analytics
Analytical cookies are used to understand how visitors interact with the website. These cookies help provide information on metrics the number of visitors, bounce rate, traffic source, etc.
Advertisement
Advertisement cookies are used to provide visitors with relevant ads and marketing campaigns. These cookies track visitors across websites and collect information to provide customized ads.
Others
Other uncategorized cookies are those that are being analyzed and have not been classified into a category as yet.
SAVE & ACCEPT